The word “diamond” is not a formal mathematical term; some people take it as equivalent to “rhombus”, while others equate it to “kite”, or treat it as either a “tilted square” or any rhombus oriented so that the long diagonal is vertical (“standing on a point”).

From 2009 to 2013, about every six months (June and December) we would get a number of questions from a class of college students in Australia, asking the same question (or a bad paraphrase): “Many people use the term ‘diamond’ for certain mathematical shapes. How is this word appropriate or not appropriate in a mathematical context?”. Sometimes this was accompanied by the question, “Is a square a rectangle?”

We gave answers ranging from a mere question like, “What does ‘appropriate’ mean to you?” (when the student showed no thought at all), to some deeper comments (when the student appeared to have pondered the question themselves). Few responded to our questions, though there were a couple good discussions.

In 2010, after getting dozens of these questions in 2009 (some pretending to be children, though using a college address), we got the following relatively well-expressed question, and decided it was time to put an answer into the archive, so we could refer to it. (As it turned out, it didn’t get into the archive until 2013 due to a backlog; after that, students apparently found it and stopped asking us, suggesting that they hadn’t actually been assigned to write to us, which would have been thoughtless, but only to find an answer online. The assignment should have been to discuss it themselves, because there are many facets that might be explored. No pun intended!)

Two of us gave answers. First, Doctor Ian talked about the need to clarify the question, which didn’t identify the type of “mathematical context” under consideration:

This discussion of classification ties in directly to the other question the students had apparently been asked, “Is a square a rectangle?” It also provides, by contrast, a good reason that “diamond” is not worth actually using in a math class:

So, the term “diamond”, not having a formal definition, as this student had found, is not helpful in teaching students about classification. But it may be helpful in provoking discussions about the meaning of “shape”:

Are diamond and rhombus different?

Then Doctor Rick added an anecdote showing how teaching about “diamonds” can be confusing:

This is, indeed, peculiar! I would not expect the two words to be taught at the same level; and they are not in the same category so as to be compared:

So, when a mathematician uses the word, if at all, it would probably be an informal term for “rhombus” (and since we already have that word, there is no need for another); but it is commonly used of a rhombus (not always, in my experience, a square, except in baseball) in a particular orientation (and therefore not really a mere shape).

When we get questions like this, about educational practice rather than about mathematics itself, we tend to do some research to find out what that practice or standards are, and we often are confounded in that attempt. 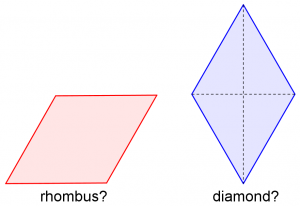 So the author evidently has that “definition” in mind (it’s not really a definition if it isn’t stated explicitly); but then they contradict it by what follows:

When I search now, I don’t find the words of the lesson plan anywhere except Doctor Rick’s answer. I do, however, find the Georgia standard that was referenced. It is interesting to compare what they say at different grades:

Grade 3: 5. Recognizes properties (such as sides and angles) of geometric shapes (such as triangles, rectangles, circles, squares, and closed and not closed figures), …

So in kindergarten, a diamond is defined as a rhombus (and presumably only the former word is used in class), but in first grade, the two are listed separately. Fortunately, diamonds are not forever; they drop out of the curriculum (along with rhombuses) at that point. I suspect the first grade standard is a typo, and they meant to continue defining a “diamond” as a rhombus, by putting “rhombus” in parentheses. Nothing is actually said about distinguishing them. But, as I have seen other times, it appears that the creator of the lesson plan took the standard literally, reading more into it than was intended; that misled the teacher, who then confused the mother who wrote to us.

What I find usually are standards that mention the rhombus only:

Reason with shapes and their attributes.

Note that the emphasis here is not primarily on knowing the words, but on the concept of classification, which is just what we have emphasized when we discuss these things.

I also found an interesting discussion of what kids think a diamond is:

The question of whether the term “diamond” should be used in elementary education (which is just one “mathematical context”) is worth a good bit of discussion in an education class. It’s too bad we rarely were able to get into that discussion with these students. Should we use formal terms, or childish terms, when we teach young children? Should we use examples, or careful definitions, to explain things? And should we, as suggested in the blog mentioned above, make an effort to listen to the children, to find out how they integrate the terms we use with their own experience? That would be “appropriate”.

8 thoughts on “What is a Diamond?”