Terminology and definitions in mathematics sometimes vary according to context. Here we’ll look at the ideas of relations, functions, and their domains, and discover that they look different from different perspectives.

A recent question about relations led me to refer to a 2017 discussion I had on the topic, that was never archived (published), but which have a record of because I subsequently discussed it with a colleague. I thought I’d use that as the basis for a post, rather than the less-interesting recent question.

Relations on one set, or between two sets

The 2017 question came from Rajesh:

Rajesh has some right ideas, and some confusion. I answered:

It appears that Rajesh’s teaching started and remained where Wikipedia starts! And because they have focused on relations on one set, he wrongly understands some terms as applying to any relation:

For example, if you search for information on reflexive relations, you will not find anything about relations between two sets.

A relation is called symmetric if for any ordered pair \((x,y)\), the symmetric pair \((y,x)\) is also in the relation; in the example, if Bob is the spouse of Marie, then also Marie is the spouse of Bob, so both (Bob, Marie) and (Marie, Bob) are in the relation. But in a relation from men to women, the first element of every pair has to be a man. The relation he is thinking of is really the “is spouse of” relation on one set of people, {Bob, Charlie, John, Marie, Julie}. It is not 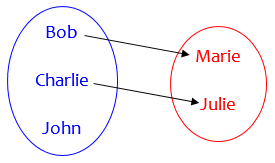 that he has in mind (though that’s what he showed), but rather 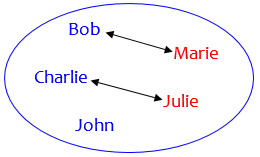 on one set of people. This relation is symmetric.

The world of algebra: functions

This is typical of algebra textbooks I have taught from that introduce the idea of functions as a special kind of relation.

The next day, Rajesh wrote back with two examples that seemed contradictory, the first from the reference I’d given:

The other reference, which is no longer accessible, was in the “discrete math world”, and said

So why does the first site require an element to be used on the left side of a relation, while the other does?

Textbooks from the two worlds

I myself have taught algebra more often than discrete math, so my first thoughts were in that direction.

So in this context, the domain is just the first set named, and not all elements of it need be related to anything.

So a function, in this context, is a relation with some restrictions, one of which is that every element of the domain (still the first set named) must be used.

Because relations are used only as a base from which to introduce functions, some features are omitted. The restriction that the first set must be entirely used has been moved from functions up to the definition of relations.

Getting a second opinion on domains

I wasn’t quite sure, so I showed this discussion to a colleague, Steve, who teaches a full course in discrete math. Here is his initial reply:

Hi David.   I will try to address this situation in the following paragraph.  Hopefully it will capture enough to answer the student’s question.  Please let me know if you would like me to clarify or expand upon anything.

Now, if the sets A and B are the same (i.e. the relation is from A to A) then we simply say that we have a relation on the set A.  It is in this context that we speak of the properties of reflexivity, symmetry, and transitivity (and when appropriate, the notion of an equivalence relation).  If the sets A and B are not the same, then the concepts of reflexivity, etc… do not make sense and are not spoken of.

In Algebra courses, the sets A and B are typically subsets of the Reals.  But more generally these relations may exist between any pair of sets.

I hadn’t pointed out explicitly where I was concerned, so I explained more clearly:

What interests me is the apparent variation in the use of “domain” with regard to relations in general.

Epp (p. 14) says that the “domain” of a relation from A to B​ is the entire set A, not just the set of all elements of A that are related to something, and clearly uses it that way in example 1.3.2 on page 15.

I have in the past said what you say, that the domain is only the set of elements of A that are related to something in B (and there is no word for set A itself in general); having checked Epp to see what a good textbook says in the context of general relations, I thought I’d corrected a misunderstanding on my part.

Here is my initial image of the two worlds:

But Epp seems to be different:

Looking at other sources, I see that they all agree with my former understanding, and yours. Are you saying that Epp is simply wrong, or  might it be an ambiguity where different authors use the word in different ways?

Ultimately, I think that the word “domain” is probably not really relevant unless you are dealing with functions, and is never used of equivalence relations and the like; so the question is moot. I’m not sure of that, though.

(The Purplemath page that led to the follow-up question is wrong either way, as it shows in its fourth example the number 16 being in the “domain” but not mapping to anything, in addition to saying it is not a relation at all.)

As I perceive it, the Purplemath example straddles the boundary between the two worlds, and so is inconsistent with either.

Is there a name for the set containing the domain?

Ahh… yes, I see what you are getting at. I have also contemplated this at one time. I have seen the term domain defined differently depending on the author. The most common definition I have seen is that the domain consists of all elements of the first set that are related to at least one element of the second set. With that definition, it begs the question as to what we would call the first set and honestly, I am not sure. I have several books on Discrete Math in my office and looked through a few of them with no luck on finding any kind of terminology associated with the first set, unless like Epp, they call it the domain.

Then I found an older answer I had given to a similar issue, and shared that:

Here is something I wrote a year ago to a teacher, that deals with this question of terminology. The question was this:

This question is in the context of functions, where we usually don’t talk about the set containing the domain, as we do for the range; but I looked beyond it to the general case of a relation.

This idea fills in the gap, giving a name to a “function” whose domain need not be the entire “corange”.

To Steve, I added:

But in the end, I do think the main issue is that relations are used in a couple different “worlds”, and “domain” is most useful in the world of functions, where we can do without a name for the containing set. So probably this is like some other issues where the mathematical community just hasn’t come to a consensus because it isn’t really needed. It arises mostly in textbooks that try to give the big picture of relations, and when students search the web and find contradictory answers.

Thanks David. I think you are correct in what you indicated at the end of the email.

The world of mathematics is not always as neat as we pretend it is; this is one of many dark corners where cobwebs hide.

2 thoughts on “Two Worlds of Relations”