We often compare math problems to puzzles; and some puzzles are math problems. I want to devote a couple posts to interesting puzzles that can be attacked in various ways. Here, we are given the weights of every possible pair of hay bales, and have to work out the individual weights. This classic can be solved with lots of algebra, or a little carefully managed algebra, or just by logical reasoning.

Solving by a system of equations

We’ve see this problem with a couple different sets of numbers; here is the first version we got, in 1996:

Doctor Alain showed how to start solving the problem, leaving it unfinished:

With ten numbers, we could have written ten equations if we knew which sum is which number; we only need five equations to solve for five variables. That’s the problem. We have started with four equations, based on the largest and smallest numbers; the fifth, being derived from those, adds no information to the system of equations, but does help decide what the other sums have to be. The first four, plus one of the two options for the third, will yield our solution.

Not a bad method, though you might prefer to avoid the need to try two possibilities.

For a different method with similar difficulty (and with different numbers), see this answer by Doctor Pete in 1997:

Earlier in 1997, we had a similar question (with the same smaller numbers):

Doctor Rob chose to use a very different method with no explicit algebra:

(You may not have noticed that we aren’t told that the weights are all integers or not; it is natural to assume that, but it might not have been so! Now we are sure.)

Now we leave the pieces that can be expressed algebraically, and start using the fact that the weights are distinct integers:

The check is required, because until now we haven’t used all of the sums. But it works.

Some people would complain that this is not as “mathematical” as one of the algebraic methods, but that is not true; much of mathematics is more logical than algebraic.

In 2002 we again got essentially the same question:

(Note that last paragraph: That is Polya’s final step, and is good teaching!)

This time Doctor Greenie answered, giving a quick algebraic solution that has much in common with the elimination method. It happens that, because we already had several such answers in the archive, this answer was not published at the time; we’ll see why it was below. After first referring to the three answers we already had (in the order I have listed them), he offered his method:

This is how all answers have begun.  So is the next bit:

That is a valuable addition: in observing someone solve a problem, it is important not only to see what he does (here, identifying those four pairs), but also what he does not do! If you were to try solving without thinking very carefully, momentum might lead you to write more equations that are not necessarily true. Math requires this level of care.

You will recognize this from Doctor Rob’s method, though he didn’t express it algebraically. This sum is 214.

He briefly describes how to finish up:

The “patient” got the answer:

The answer is correct, and either way of stating it (listing weights, or identifying individual bales in order) is good. Doctor Greenie acknowledged that:

Then, 11 years later (2013) a reader (Jim) wrote us, having apparently read only the first answer above (1996), and suggesting a better way. I responded, pointing out that his answer was much like Doctor Rob’s and then quoting for him Doctor Greenie’s not-yet-published answer above, which is even more like it. As a result, the latter was then added to the archive, and Jim’s communication was appended to it – giving the accidental impression that it is a response to Doctor Greenie, when in fact it is responding to Doctor Alain. Here it is:

I’ll be showing my own “discrete math” (logical) method soon.

Now Jim added a new insight we haven’t seen yet:

Reasoning in a table

In 2003, I gave a non-algebraic method for solving a simpler version of the problem, here:

We can make relationships visible by making an addition table for the five numbers, something like this: 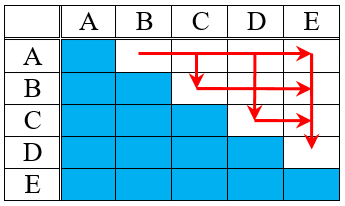 The five bale weights will be A, B, C, D, and E, in increasing order.We only need to add each pair in one order, and don’t need to add any bale to itself, so the blue cells will not be used. That leaves ten places to put our ten sums.

Each row or column in the addition table will also be in increasing order, as indicated by the arrows. 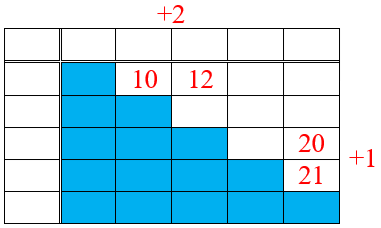 (Red indicates what’s new.) I have placed those four numbers, and noted that the second and third bales must differ by 2, and the third and fourth must differ by 1, as indicated by the sums we’ve filled in.

Row and column headings (bale weights) are the same, so what is true of rows is also true of columns; that lets us fill in another row difference and another column difference, and therefore fill in two more sums. 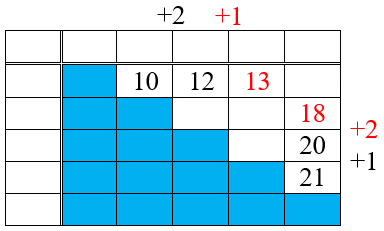 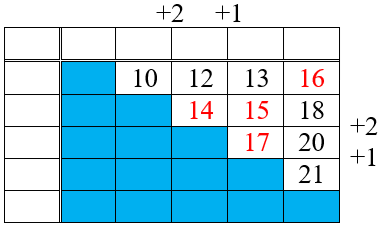 Now we can fill in the remaining differences: 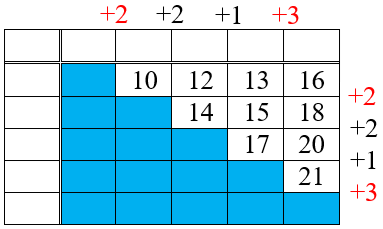 All that’s left is to find the actual weights! We see that 10 is the sum of two numbers that differ by 2, so they must be 4 and 6; from there we can fill in the rest: 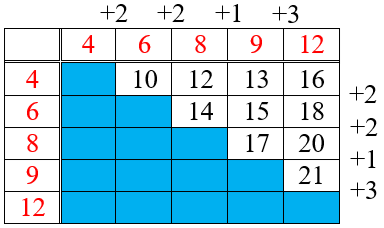 Certainly this method was a lot longer than the quick algebra technique. But it teaches logical reasoning, and required no algebra.