A recent question asked about a well-known problem about stacking books (or cards, or dominoes) so that the top one extends beyond the base, giving a link to one of many explanations of it – but one, like many, that doesn’t quite fill in all the details. Doctor Rick responded with a link to an answer he gave 5 years ago. That’s what we’ll look at today.

There are many versions of this problem; here is the one Kalyan asked about in mid-August, which is reportedly from an edition of Stewart’s Calculus text:

Suppose you have a large supply of books, all the same size, and you stack them at the edge of a table, with each book extending farther beyond the edge of the table than the one beneath it. Show that it is possible to do this so that the top book extends entirely beyond the table.

In fact, show that the top book can extend any distance at all beyond the edge of the table if the stack is high enough.

In real life, you can just push each book (or block, or card) gently until it’s almost ready to tip over, starting from the top. Here’s what I got when I did that with some actual books:

It doesn’t really work as well as the theory!

It works a little better with dominoes, which are more rigid: 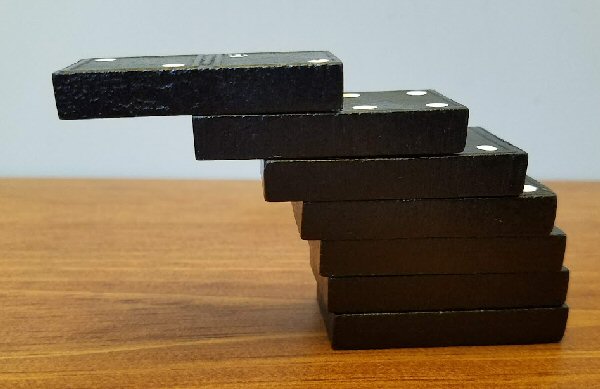 Our goal here is to prove that this can (in theory, though not in reality) be extended infinitely far.

The question we’ll look at, from 2017, was very similar to Kalyan’s question:

The text leading up to the quoted paragraph says,

Given n dominoes stacked following this construction, we can take the whole stack and place it on top of one more brick without displacement, and it still won’t collapse. Shifting the whole stack of n on top of the new one, at a certain point it will topple over. We want to compute the location of this point, which is exactly the point at the bottom of the nth domino around which the torque is 0. For the first domino this is 1/2, for the second 1/4, and after that you need pen and paper to proceed.

This explanation relies heavily on physics and some calculus; but Nikola’s question is not about this part (which we’ll restate more simply below), but about the recursive formula including a summation. That’s the part we need to dig into.

Other explanations that miss the mark

Doctor Rick replied, first looking for references he might provide:

The reader is, of course, expected to figure that out! That’s typical of that site, which is not a tutorial. Can we find a fuller explanation?

Here is our ideal block, with X marking its center of mass (CM):

Here is the MathWorld picture: 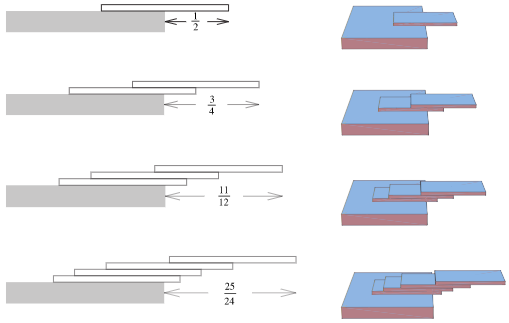 Here is that one block on the edge of the table:

At this exact location, it would be teetering on the edge, ready to fall off if a breeze pushed it a little. And if the corner were a little rounded, it would be beyond its actual support and would fall. We’re assuming mathematically perfect blocks and table!

Here is how we find the center of mass of two objects: 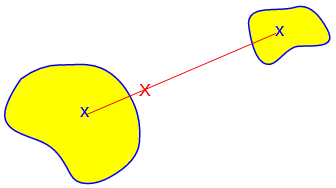 The combined CM lies along the line joining the individual CMs, at a point inversely proportional to their masses, as we know from experience with see-saws:

Now we apply this to two blocks:

We place the edge of the third block under the center of mass of the top two combined, so it will just balance:

Here, for example, is how we find the center of mass of the first three blocks:

Here I have simulated 35 blocks using a bar chart; you can see that the offset passes 1 after 4 blocks, and surpasses 2 after 31 blocks. To reach 3, you need 227 (not shown)! 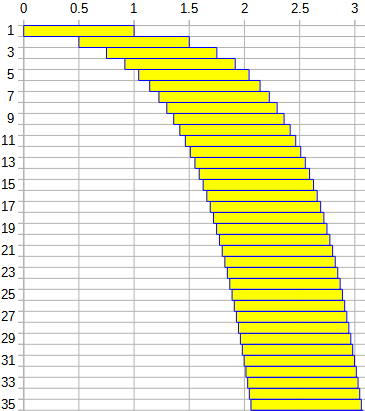