We have been looking at ways to count possibilities (combinatorics), including a couple ways to model a problem using blanks to fill in. Today, we’ll consider a special model called Stars and Bars, which can be particularly useful in certain problems, and yields a couple useful formulas. (I only remember the method, not the formulas.)

We’ll start with a simple example from 2001 that introduces the method:

“Balls in urns” are a classic way to illustrate problems of this type; today, I rarely see the word “urn” outside of combinatorics, and more often use words like “boxes” or “bags” or “bins”. Picture, say, 3 baskets in a row, and 5 balls to be put in them. The balls are all alike (“indistinguishable”), so we don’t know or care which is in which basket; but we do care how many balls are in basket 1, how many in basket 2, and so on. 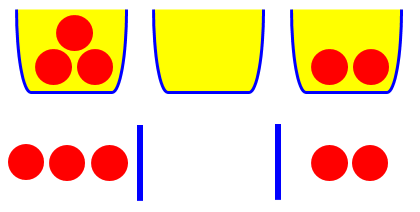 Changing our perspective from three urns to 7 symbols, we have b=5, u=3, u-1=2, so we are arranging 7 symbols, which can be thought of as choosing 2 of 7 places to put the separators, with balls in the other places. (Notice how the balls and separators have turned into mere items to be placed in blanks, connecting us back to the most basic model.)

It is common to replace the balls with “stars”, and to call the separators “bars”, yielding the popular name of the technique. We have 5 stars, and 2 bars in our example:

I myself have occasionally used “o” and “|”, calling them “sticks and stones”. Or I might call them “balls and walls”. It’s all the same idea.

(By the way, it can be instructive to look at the orderly pattern Doctor Rob used to list these possibilities.)

For another introductory explanation, see

Now let’s look at a problem in which the technique is a little more abstract:

The numbers here are too large to hope to list the possibilities. Doctor Sam answered this, using stars and bars; he swapped the roles of stars and bars (using the bars as tally marks and stars as separators), which I will change for the sake of consistency here:

Do you notice something different here? You might have expected the boxes to play the role of “urns”, but they don’t. There is only one box! Instead, our 5 “urns” separated by the 4 bars represent the types of donuts! And the stars are donuts, but they are not placed in boxes but assigned to categories. Why? Because in stars and bars, the stars must be indistinguishable, while the bars separate distinguishable containers. In this problem, the locations don’t matter, but the types of donuts are distinct, so they must be the “containers”.

I like Doctor Sam’s way of introducing the idea here, using as his model not the donuts in a box, but tallies on an order form. (It is because tally marks are typically vertical lines, that he reversed the meaning of the symbols.) Such a concrete model is a great way to make the abstract manageable.

Distributing apples: At least one to each

The next problem has a little twist.

What we have discussed so far allowed for the possibility that some urns would be empty. What if we disallow that?

This looks like the same idea, but something is different. Doctor Mitteldorf saw that further explanation would be useful:

We have the same representation as before, but with the new requirement that no child can be empty-handed, we must require that no two bars can be adjacent. They must be separated by stars. So rather than just freely place bars anywhere, we now think of gaps between stars, and place only one bar (if any) in each gap. For 8 stars and 4 urns (3 bars), we can put bars in any of the 7 spaces between stars (not on the outside, because that would leave an empty urn):

One such choice is

This corresponds to the arrangement:

Again, we can check our work by either actually listing all possibilities, or by imagining doing so and using some shortcuts:

Something neither Doctor Anthony or Doctor Mitteldorf did is to show an alternative calculation. Think about this: In order to ensure that each child gets at least one apple, we could just give one to each, and then use the method we used previously! That is, we use up 4 of the apples, and then distribute the remaining 4 apples to the 4 children, allowing some to get none. Our previous formula results in \(\displaystyle{{4+4-1}\choose{4}} = {7\choose 4} = 35\) — the same answer!

Let’s look at one more problem using this technique, from 2014:

Because order is being ignored (it doesn’t matter who makes what sign), this isn’t a permutation problem; but it also isn’t a combination problem in the usual sense, because repetitions are allowed.

You may notice that I previously referred to an answer to the same problem from 2001, which I evidently didn’t know about when I wrote this answer; but that gave me a chance to give a deeper explanation. I might have use the notation RPF (Rock, Paper, Scissors), but those terms weren’t used in the question, and I chose to stick with KC’s notation.

This comment relates to a standard way to list combinations. By always writing the elements in the same order, we are actually ignoring order — in effect, representing all possible orderings of a given combination by one standard ordering.

Here we have a second model of the problem, as a mere sum. The order implies meaning; the first number in the sum is the number of closed fists, and so on. This is reminiscent of the way in which matrices are used to represent a system of equations, the first number being the coefficient of x, the second of y, and so on. We are abstracting away all direct reference to meaning, turning a multiset into a mere list of numbers.

We have made a series of models, each time re-imagining an existing representation as another that we might be able to count more easily. Multiple representations are a key idea for learning math well.

We saw this approach (filling spaces) in the last problem, where zero wasn’t allowed. But it is allowed here (no one has to make any particular sign). So we have to count arrangements in a way that allows any arrangement of the two bars and three stars — which is exactly what the basic combination formula does:

This is the same list KC had, but in an orderly form.

3 thoughts on “Stars and Bars: Counting Ways to Distribute Items”