Last time we looked at the classic puzzle of magic squares. Many questions we get are about similar kinds of puzzles, and here I want to look at “magic polygons” (triangles, squares, pentagons) in which, unlike the traditional magic squares, only the edges count. These are a common subject of elementary-level questions.

First is a question from 2002 about squares:

So we want something like this, which is less than a full magic square, and therefore more flexible: 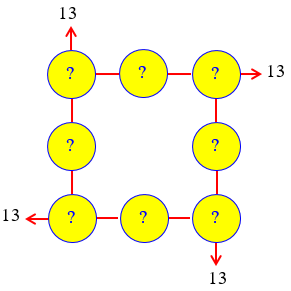 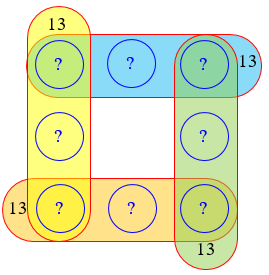 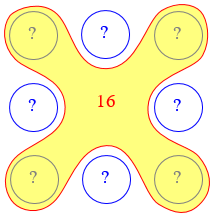 One way to see this is to start with the lower left number. If it is even, then exactly one other number in its row can be even, and likewise in its column. If the lower right is even, then depending on whether the upper left is even we are forced into the first arrangement or the second by the need for four of each. If the lower left were odd, either its row is all odd or both others are even, and we are forced into one of these, both of which are equivalent to the second pattern:

This sort of thinking about “parity” (whether a number is even or odd) is often useful to restrict options.

So now we know that one row is all odd. And we can be sure which numbers those are, since 1+3+5+7 = 16, so it must be the 3 that is omitted there. Doctor Greenie went a different direction: 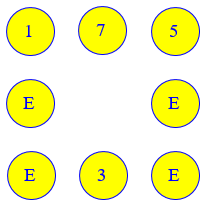 All solutions can be obtained from these by rotation or reflection, for a total of 16.

A 2004 question took a challenging problem and made it harder:

I answered this question, not by working directly with the ugly numbers given, but by transforming the problem to a nicer one (which may remind you of a trick we used last week):

The numbers in the solution to this problem will all be 4 times those in the other, so dividing them by 4 will give the solution. The whole thing could have been done using the fractions (which I would write using their common denominator, to make adding them easier, at least); but anything that will reduce the chances of error, and make the problem feel more tractable, is good.

From there, I moved on to the trick used above, finding the sum of the corner numbers:

We’ll finish the problem as part of the next answer.

Shannon has clearly done some good initial work. I answered:

I’m always encouraged when a puzzle is presented in the right way. And I love helping future (or current) teachers.

I chose to do what Shannon must have done (thinking about what sums can make 12), and see what more can be done with that:

I wanted to leave as much as possible for Shannon to do; but here is the full list, as I showed it above:

I often make suggestions without actually solving a problem first, in order to be working with them rather than for them; but when I do that, sometimes I miss an issue that will stump them. This time, there was no problem with my plan.

Here’s how that method worked: We have the top,

This was a strongly trial-and-error method. What if we had used Doctor Greenie’s method on this one?

How about parity? Each side, having an even sum, must be either all even, or one even and two odds. The only possible patterns are

Now we can list the possible sums to 12, as we did with full magic squares:

With three evens in a row, we must have (in some orientation)

With odds in the corners, the sum of the corners would be 16, not 12. So there is only one solution (ignoring rotations and reflections), which is the same one we found by trial and error.

Finishing up Danny’s problem, we have to divide everything by 4:

We never heard back from Danny to be sure how he did.

Note that here we are given a list of magic sums; we could have worked out what the possibilities are, but they’ve saved us that work.

Ramona has already done some of the work I’d have suggested!

I had a few more ideas, starting with the old corner trick:

I’ll leave it to you to solve the other cases.

We had a similar question the next year:

We have also been asked about magic triangles of the same sort, typically asking a different kind of question:

Stay tuned for more puzzles, from time to time.