I’m looking at various common puzzles, and ways to think about them logically. Today, we’ll examine basic magic squares: not the standardized methods you can look up, but how a kid can work them out when seeing them for the first time. Often they are not even told they have a name, so there is nothing to look up! But there is some great thinking to be done.

I’ll start with a relatively simple version of the problem, from 2006:

Here the class is given the numbers to use and the total for each row (which is a significant help: We’ll later see it being left for the student to work out). We have to fill this in: 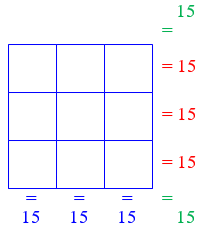 If you don’t know anything about the puzzle, it can seem like a lot of busy work at best, and frustrating trial and error at worst. And, yes, a lot of students probably come away frustrated. But, in fact, trial and error is a valuable skill, and a parent’s primary role may be to encourage patience.

So how would I approach it as a fourth-grader?

We need to fill in three pairs that each add to 14, and we can’t do it: 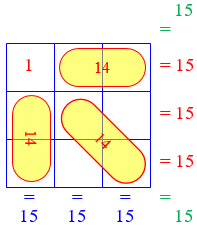 An important rule for solving unfamiliar puzzles is to just try something! Whatever you do, if you pay attention, there will be things to learn, even if they are only what not to do. (Some of what we’re learning here will be used more deliberately in a more advanced answer later.)

Again, I’ve just tried something, to see what I can learn: 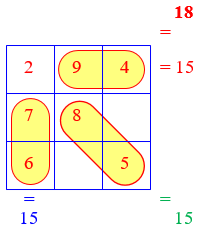 Again, we don’t have to know what we’re doing; we’re just feeling our way around to learn about the nature of the problem. I arbitrarily put each pair in some direction, and in decreasing order going away from the 2. (My trained instincts actually tell me that might be the worst thing to do, but I’m deliberately ignoring that, in order to demonstrate how to learn.)

I’ve put in a row, a column, and a diagonal; what other three-in-a-row have I made? 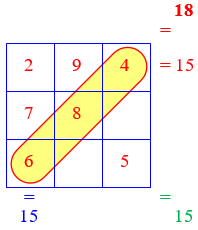 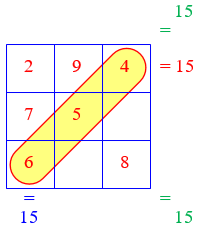 Rather than arbitrarily place the pairs, I needed to intentionally place numbers on the diagonal. But in fact, I could use my naive first placement as a basis for a modification. Nothing I’ve done has been wasted, because I’m being observant.

And here’s the final answer: 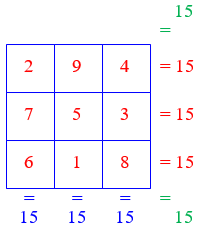 Note that because we are just using trial and error, we don’t know whether there are other solutions; but at this level, we’ve had a great success in finding a solution at all!

It was fun talking about my thinking here (also called metacognition – being aware of how you are thinking, which is a necessary part of developing greater skills), and I hope it was a good model for both parent and child. The father responded,

An older student can use a more orderly method; in effect, we will just be front-loading much the same kind of thinking we did in the trial and error approach. Here is a question from 2005:

I’m not sure what the hint about small numbers means. The middle-number guess is wrong (as we’ll specifically see in our last example below).

Doctor Wilko took this one:

The first issue we face is that in this version of the problem, we haven’t been told what the sum of each row (the “magic number”) has to be. Can we figure it out? This is a classic trick:

This quick explanation in words is enough for some people, but an explicit demonstration will help others:

In some puzzles (as we’ll see next time), a key number like this is not determined by the problem; but in magic squares, it is. That’s an important first step.

Now we have to think about how to arrange the numbers to get that sum. Rather than discover the issues that will arise by trial, Doctor Wilko considers them ahead of time:

I can see that in making this list, he has actually used, not a random trial and error method, but an orderly search. He kept the numbers in increasing order in each sum, and started with the first number being 1, then the second number being the smallest possible value. The result is a list much like a list of numbers in increasing order (158, 168, 249, …) This way, we can be sure that nothing was missed. This is closely related to the way I started with 1 in the corner and listed pairs that add to 14, then tried 2. (Do you see my list of pairs that sum to 14 hidden in there?)

For what he does next, I find it helpful to write the sums as follows, with each number assigned a column; this also shows a pattern in the numbers that helped in making the list:

Here we can see where each individual number fits into the list. By the way, did you notice that there are 8 sums here, and we’ll need each of them, since there are 3 rows, 3 columns, and 2 diagonals, for a total of 8 sets of three to add? That suggests how “magical” a magic square really is!

We’re exhaustively examining each possible type of cell, and comparing them to our exhaustive list of sums.

Now we’re all set to start actually build a magic square with confidence (having bypassed all the “errors”, so our “trials” will work):

We had only two points where we made a choice here: We picked one of 4 possibilities for the upper left corner, and then one of 2 possibilities for the upper right. That makes a total of 8 ways we could have done it; and each of these can be obtained by rotating what we did, or reflecting it. So in a sense all 8 solutions are really the same solution placed differently. By chance, we got the very same solution as before.

What can go in the middle?

Let’s look at one more question of this sort, this one from 2001:

This is the usual 3×3 magic square question. As we’ve seen, it’s not quite right to say there is only one way to do it. Doctor Jeremiah answered, first finding the “magic sum”:

Next, rather than list all possible sums, he focused on the middle cell, using inequalities:

He left the “patient” with just these hints. A good next step might be to observe that opposite cells will all have to sum to 10.

Another question we’ve answered dealt with a modified version of the question: a 4×4 square with a special set of numbers, and no diagonals to worry about:

Most of the questions in the Ask Dr. Math archive about magic squares tell about routine methods to be learned for making magic squares of various sizes, without talking about how those algorithms would have been invented. I’ll eventually put those into a post, but here are a couple of them if you are interested:

Next time, I’ll look at some “magic squares” (and triangles and pentagons) that use only the edges of a figure, not a solid square.