We often see polynomials in a simplistic way, imagining that any function whose graph resembles a polynomial is a polynomial. Much as an attempt to mimic random data often lacks essential properties of genuine randomness, so what we intend to be a polynomial often is not. As we observe more polynomials, we can start to recognize more of the constraints to their shapes; but even teachers can sometimes design problems that are not quite what they seem. Here I will analyze a graph to death, pointing out what it is not, before answering the question as it was presumably intended.

Here is the question, sent in by Randy in the last day of July:

How can I write a Polynomial that can represent the graph below? 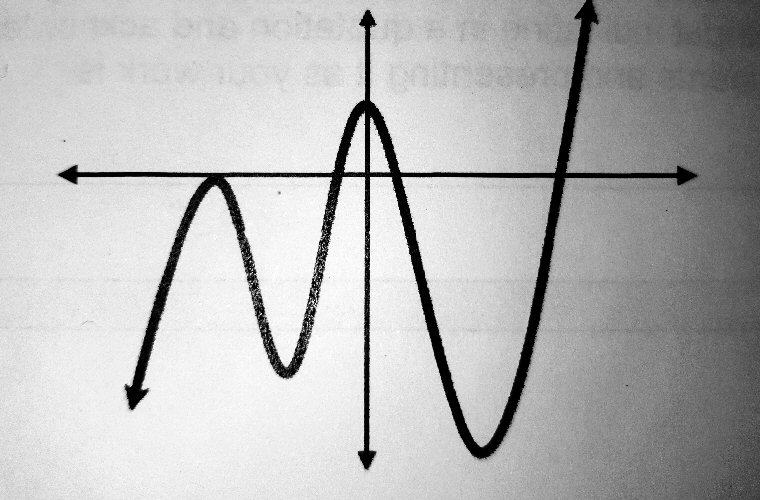 This looks very much like a polynomial; yet I could recognize from experience that it was probably hand-drawn in some sense, not made by actually graphing a polynomial. It just looks a little too tame. I decided to take this as an opportunity to “play”, experimenting with this open-ended question and taking it further than was surely intended, to check my intuition.

In particular, I observed that the phrase “can represent” is ambiguous. How accurate must the representation be? What if there is no polynomial that actually does represent the graph?

That depends on exactly what you hope to do! I hope you’ll tell me the context of your question, whether it’s an assignment or just a matter of curiosity. Meanwhile, I’m going to have fun with it.

Since no coordinates are shown, you may just mean, how could you write a polynomial whose graph would look generally like that, with two local maxima and two local minima. It is easy to see the minimal degree for such a polynomial. 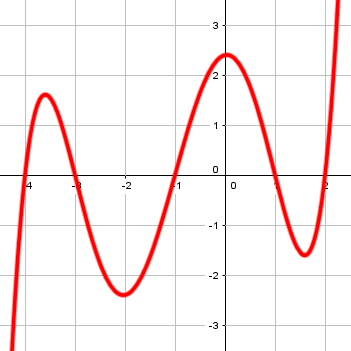 Shifting this down about 1.6 would make it look a lot like our goal.

Here are the five segments I imagine when I see it, which suggest degree 5: 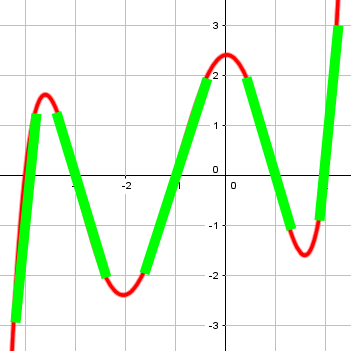 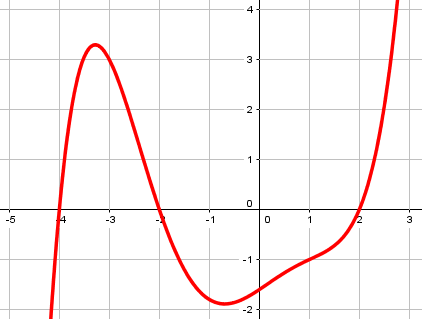 There the segments are more subtle, because the change of direction between them is not always from up to down; the slope just alternately decreases and increases: 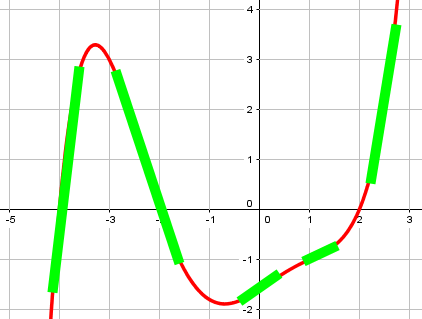 Anywhere, here’s what we get by shifting my function down: 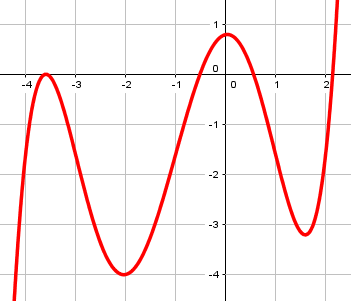 But probably a little more is expected:

Or, you might want to estimate the x- and y-intercepts and write a polynomial using the appropriate factors. If you do that, though, you’ll find that a polynomial of minimal degree that has these intercepts doesn’t really match the graph. Here is what I get using GeoGebra: 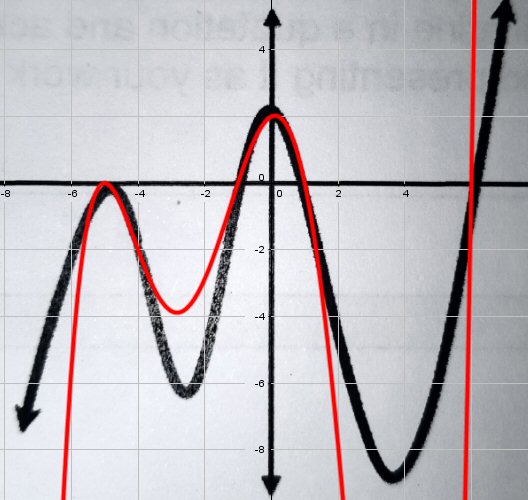 If I adjust this (by dividing by a constant) to make it fit in the grid, I get this: 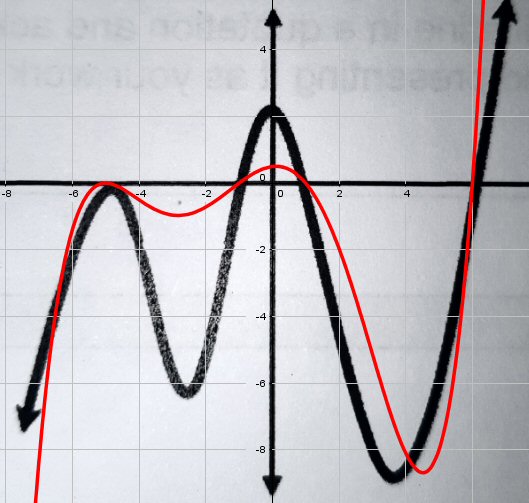 Many textbooks give the false impression that any polynomial-like curve is just what it looks like. But our general impression tends to be wrong.

So, why is this so far from fitting the heights of the relative extremes? The problem is that a fifth-degree polynomial only has six parameters to adjust (either the coefficients in expanded form, or the zeros and the constant multiplier in factored form). Once we’ve chosen the intercepts, we have no more freedom to adjust individual heights; we have to take what we get. To put it another way, adjusting horizontal features (the x-intercepts) entails vertical features (slopes and extremes) in ways we can’t control.

Could we use a higher degree, with more parameters, and get closer? I’m sure that isn’t what was intended, but …

Just for fun, I tried multiplying this polynomial by a quadratic and manually adjusting the coefficients (using sliders in GeoGebra) to try to get a better fit. Here is the best I could do: 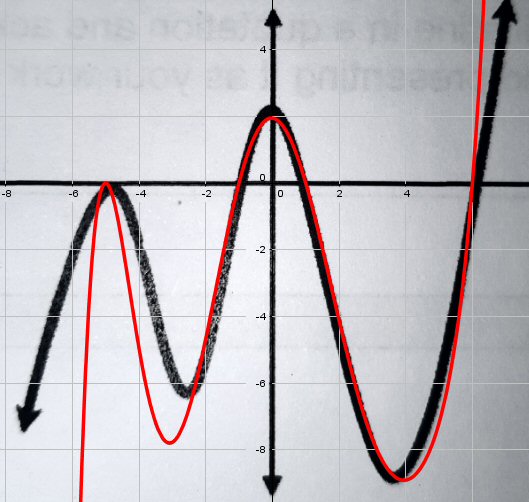 To do better, we could identify a few more points on the graph and plug them into, say, a general degree-11 polynomial and solve for the coefficients; but that’s actually worse (here using GeoGebra’s FitPoly function and the points in green): 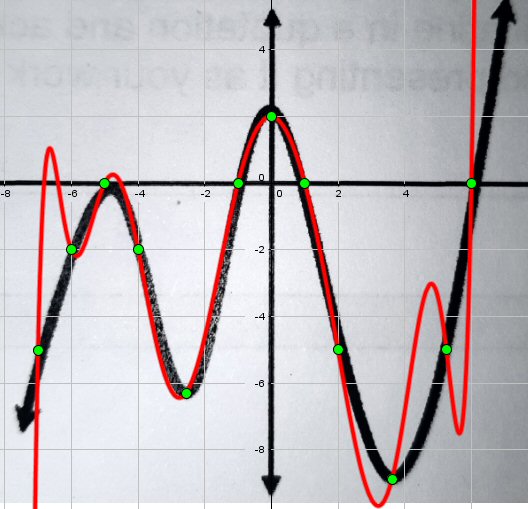 If you try to squeeze a polynomial to fit the shape you want, it pops out in other places!

As an alternative, I entered ten of those points into a spreadsheet (because the highest degree it could handle is 9) and made a polynomial trendline; here is what it gave, a little better than GeoGebra’s: 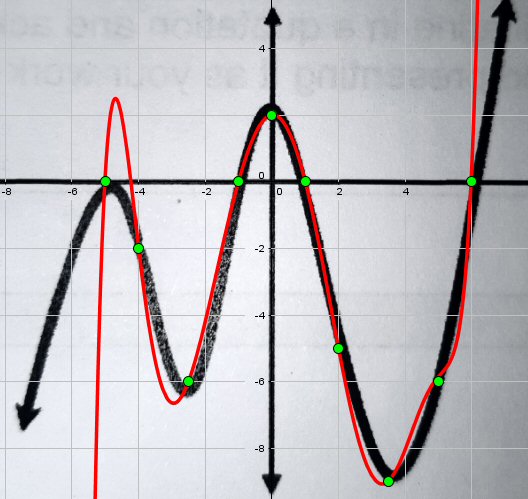 Other attempts using a different set of points made the match far worse.

If I really wanted to get it right, I’d use the derivative at the turning points, as well as the function values; but I’d have to do that manually, and since I’m doing this “just for fun”, I’m not going to try just yet!

The point I’m really making is that any squiggle you make that looks like a polynomial to you, is probably a whole lot more complicated than you realize!

When you tell me what the actual goal is, we can discuss more details or what you might actually be expected to do.

All of this is to say that when I write a problem like this, I am careful to provide the graph of the actual polynomial I want as an answer, even if I don’t demand that the answer be exact. I don’t want students to do the right work, but then waste time struggling to decide whether the differences they find between the graph of their function, and the graph I provided, are enough to make their answer wrong. I don’t want to ask what function “could” have this graph, when in fact no polynomial actually does.

But we need to move on to the intended meaning of an imperfect problem. I had intentionally not given the equations I was graphing, so Randy would have work to do, even after I’d demonstrated the possibilities.

Randy replied the next morning with an attempt, showing he understood the main ideas, at least:

Is this a valid answer?

The only thing that is really questionable about this is the unexplained number 0.01.

If all you want is the same general shape (as in my initial comment), then yes. Here is the graph, which looks quite good in that respect: 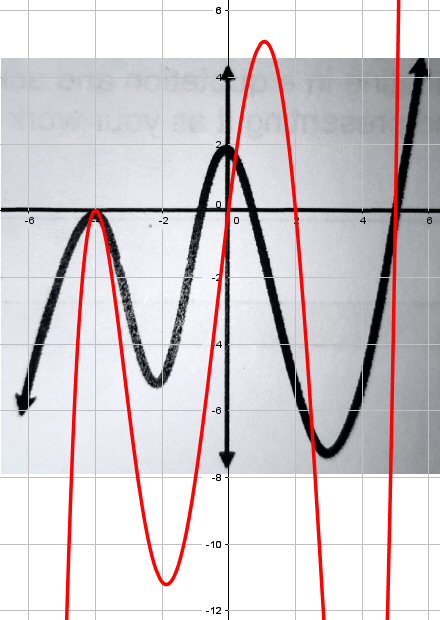 You (or your teacher?) have to define what you consider to be a valid answer, since as I showed, you aren’t going to get an exact match. Does it have to have a peak at x=0, for example?

Since there was no scale, you don’t have to use the same numbers I show for intercepts, but I would expect not to have an intercept so close to 0. For my functions, I used x-intercepts -5, -1, 1, and 6, having scaled the graph to put all the intercepts approximately at integers, but otherwise probably did the same sort of thinking you did.

Was this an assigned exercise? How was it worded, exactly? What topics were most recently discussed? Are you allowed/expected to use a grapher like my GeoGebra, or Desmos?

Since his main error seemed to be the use of 0.01 instead of -1, I stated the intercepts I used; the most important piece of the exercise is in using those, not choosing them.

I was hoping that something in the context would give us a clearer idea of what constitutes a satisfactory answer. I expected the zeros to be the main concern, but if the context were calculus and there had been numbers on the axes, more might be demanded.

Randy replied with the entire problem:

That’s the question I got.

The zeroes he wrote in are similar to mine, and not what he used for his equation.

But we never learned what part (b) is, which could be interesting.

The word “could” is probably intended to acknowledge that your answer only needs to match the basic visible features, without needing to exactly match, which is good.

The numbers you added to it for intercepts more or less agree with mine; use those, and you should be good. 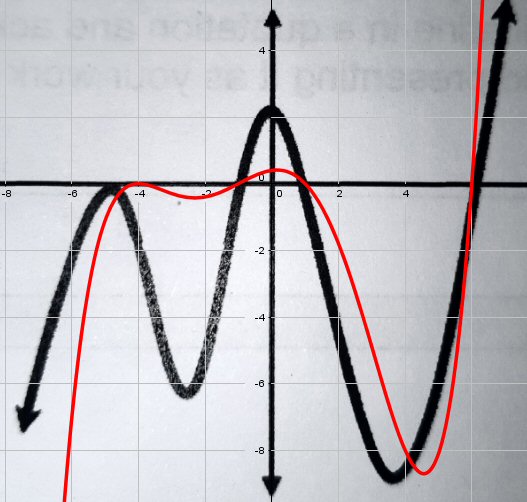 That was probably acceptable, given the vague statement of the problem.

The next day, we got a question from Charli that raises a similar issue. This discussion didn’t go very far (in part because this is a graded assignment, so we only gave general suggestions, and also because she never read our last reply), but the problem was to write a polynomial for a given curve: 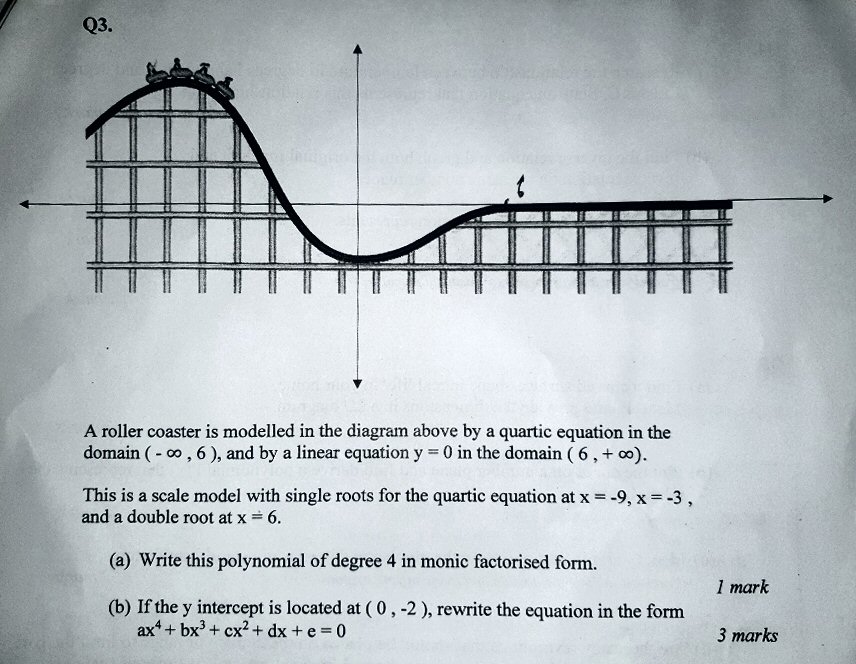 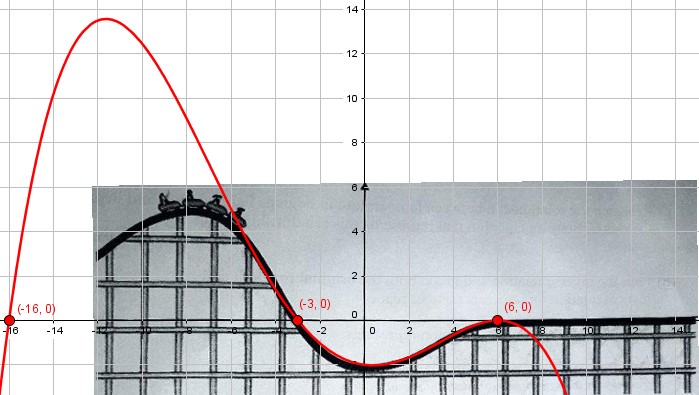 So although the problem as stated is easy, the picture is not really quite right. In general, not every roller coaster you want to make can be described as a polynomial!

Just as the next part of the problem presumably asks for the piecewise function that includes the straight segment, a real model would use yet a third piece for the top part. And we would choose that function by matching the slopes, not just location, at the point where they meet. And that would make this a calculus problem.