A question in September, about graphing a horizontally-stretched cosine function, led to a long conversation. Between a typo in the problem and some inside-out thinking, this surprisingly non-routine problem led to some good mind-stretching! I have edited this down considerably by removing distractions from the main ideas, but it still shows how far we go in guiding a student to find their own way to a solution.

Here is the question, from Frankie:

For the question below I’m unsure how to get the answers for (a) and (c).

For (a), wouldn’t stretching the cosine graph be able to give any infinite number of solutions the larger you make k ? If so how could you say how many solutions/roots there are?

And lastly for (c) how would you go about finding the range of values for k, as I haven’t had this demonstrated in class and cannot find any examples in my textbook.

(In the original question, Frankie misquoted the problem, which led to some confusion. Showing the actual problem as given often helps us get to the main issues more quickly! But in this case, even the original problem is faulty.)

Part (b): Graphing with a stretch

Hi, Frankie, thanks for writing to the Math Doctors.

I believe there is a typo in the problem. The inequality 0 ≤ k ≤ 360 makes no sense to me. First of all, that would mean that k is qualified twice; there would be no need for the additional qualification “k is a positive constant.” Second, if there is no condition on x, then the equation has an infinite number of solutions, and questions (a) and (c) make no sense. Also, it is implied that k is an angle — up to 360° — so that x would be a pure number. I really doubt that this is intended.

You don’t indicate that you had any trouble with part (b), so I’d like to see what you did with that part. It can be a good start in understanding what the other two parts mean and how to solve them. I say this because one good way to start “playing” or “experimenting” with a problem is to try a specific case, and letting k = 1.5 is a specific case. From that, we can try to generalize to any value of k.

Part (c) is the reverse of part (a), so without solving it yet, I would guess that the answer will involve using the expression from part (a) to write an equation in k, and solving that equation. However, since the result is to be a “range of possible values”, not just one value, there must be something else going on here. I’m pretty sure I know what it is, but I want you to discover that for yourself.

So again, please show me your answer to (b) and how you thought that through, then give (a) a try and tell me what you run into.

You may have noticed that in (a), k is an integer, while in (b) it is not, and (c) doesn’t mention integers. Frankie had initially omitted the word “integer”, changing the problem slightly. But (b) is still a good place to start.

For part (a), I’m still a little lost. From where my head is, I have an equation cos kx = 0.5. I then do arccos(0.5) to get principal value of 60 degrees and from here I’m assuming (which may be wrong) that kx=60 or something along those lines ?

Frankie is correct about where the zeros are, as shown, and has a good start on part (a).

Thanks for getting back to me.

I’d like you to extend your work on (b) by finding the solutions of the equation f(x) = 0.5. That is, find the points on the graph for which y = 0.5. The number of solutions you find will be the answer to part (a) when k = 1.5. (When I talked before about part (a) being a generalization of part (b), I was actually thinking that part (b) asked you not just for the graph but for what I’m asking you to do now.)

(I still haven’t worked the problem all the way through; I want to walk through it along with you.)

(Part (a) actually restricts k to be an integer, but that wasn’t yet clear in the actual discussion.)

Here is the same graph showing y = 0.5, showing that Frankie is right about the first two intersections in each case:

Part (a): Solving within an interval

Are you familiar with descriptions of an infinite family of solutions, such as the following?

If you are, could you find all solutions to cos(1.5x) = 0.5, expressed in this form? I just showed you half the solutions. Then, can you use this result to find all the solutions for x that are between 0° and 360°? Show me your work, not just your solution.

Okay, good. Here is my work: 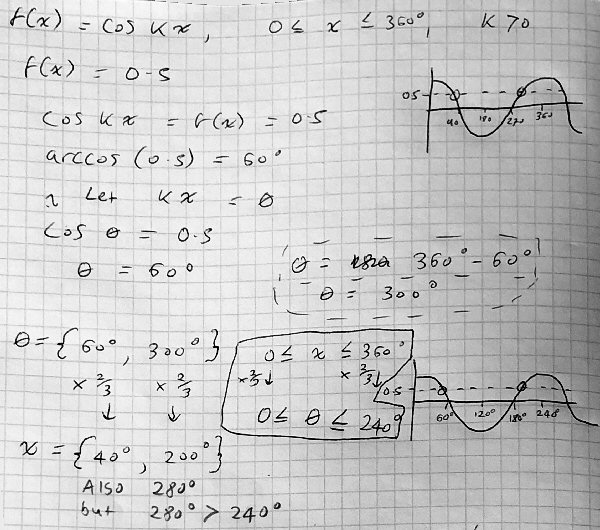 Frankie has correctly found the two angles with the given cosine, within the first cycle of the unstretched graph, but is having trouble applying the restriction on x correctly.

Keeping track of the restriction

Frankie tripped over the transformation; so Doctor Rick focused on that part:

I notice that you may have confused yourself a bit in your work. Let me go over it with you to see what’s happening. You are trying to solve the equation

You made a change of variables (not a bad idea), letting θ = xk, and then you solved the equation

Now, you change back to the original variable, x:

Still good! Now we get to some work you put in a box. Starting from the domain restriction on x,

you correctly obtain a restriction on θ:

You really made a pretty small error, but it’s important.

Once we have that, we can use each expression to write an inequality that says a particular solution meets the condition. That’s where we’re headed.

But the main point is correct: 280 is a valid solution of the problem.

I think if the scale of the graph is changed then you would just scale these up/down to size (using the appropriate scale factor) after working out the initial values of x for sin(x) = theta . 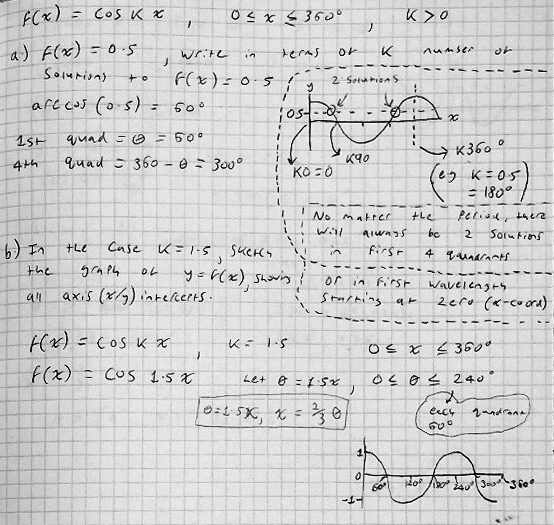 I notice that Frankie is still talking about the number of solutions “in first 4 quadrants”, that is, in one cycle, and not looking at the restriction of x to [0, 360]. The variables x and θ are still being confused, as \(0\le x\le 360\) is being used to describe one cycle of the untransformed function, which should really be \(0\le \theta\le 360\), while \(0\le \theta\le 240\) is taken to refer to one cycle of the transformed function, which should be \(0\le x\le 240\). But these are not prominent here.

Doctor Rick approved of the graph, showing implications Frankie may have missed:

Also, notice that if you add the line y = 0.5 to your figure, it intersects the graph in 3 points — confirming that there are three solutions to cos(1.5x) = 0.5. This contradicts your claim in part (a) that there are always two solutions! We have to figure out what went wrong in your reasoning.

I can’t tell exactly what you were thinking because you are rather terse in this section, but I suspect you made essentially the same mistake I pointed out last time: mixing up x and θ when considering the domain. Your graph shows two solutions in 0° ≤ θ ≤ 360°, which is true, but we’re interested in how many solutions there are in 0° ≤ x ≤ 360°.

We are almost at the solution for part (a), once we get past the confusion of the two variables.

For part (a) where I said that there are only two solutions what I meant was that in the first wavelength (i.e. 360 degrees in (a) or 240 degrees in (b) there is only 2 solutions. So for cos1.5x there is three solutions because there is 3/2 wavelengths of cos. And for my graph of (a) I think it should be 360/k that was my mistake.

After some discussion of this, Doctor Rick explained the meaning of part (a) in detail:

Let’s review exactly what the problem said (with the typo corrected):

Let’s also pull together some of the things you have determined:

I was misunderstanding the question to just be essentially how many solutions are there to f(x) however from the way it’s worded and the way you explain it I’m assuming that the number of solutions and k will be related, as k changes all x values. From the second bullet point, k = 1.5, there are three solutions so for that it is 2k solutions but I’m unsure if this is in general and how to work this out for different questions. But from the first bullet point if 360/k is the period and there are 2 solutions in each period maybe I could set up an equation like 360/k = period, period has 2 solutions so 360/k =2  ⇒ 360 = 2k solutions but I’m not certain this is right.

Yes, there are 2k solutions when k is a positive integer. You’re right not to be sure that this is general, if all you’re seeing is that when k = 1.5, there are 3 solutions. We need to generalize the method, not just the result. I’ll show you how, since we’re so close.

We have also established that within each period there are two solutions to the equation f(x) = 0.5. Therefore the number of solutions is twice the number of periods, or 2k. That’s all there is to it (after we did all the preparatory work). Now I hope there is no need for uncertainty.

Part (c): For what k are there exactly 3 solutions?

In parallel with the discussion we’ve seen, Frankie had also been attempting part (c), including some false starts I will omit. Eventually they got to this:

I have made a second attempt here with what I think is the right method for (c). 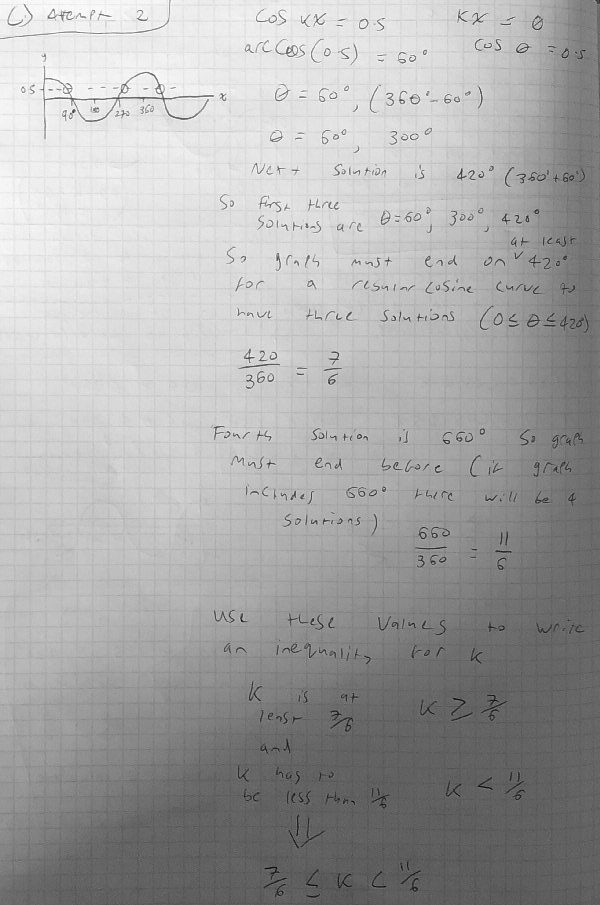 Your second attempt is good! Let me clean it up by using standard terminology, being explicit about the change of variables, and using more algebra, which is concise and precise.

using the fact you have noted that adding 360° (any number of times) to a solution of the equation produces another solution. Now we replace θ with kx:

We can solve these equations for x:

So we have the first four solutions for the general case of any k. We need to find all values of k for which only the first three are in the restricted domain:

So now we want to apply the restriction on the domain of f, and find what restrictions to put on k so that there are exactly three solutions. As you say, we require that the third solution, 420°/k, be in the domain, and thus

But we don’t want the fourth solution, 660°/k, to be in the domain, because then there would be too many solutions!

Solving these inequalities, using the fact that k > 0 so we can multiply by it without changing the direction of the inequality, we obtain

And that’s the answer to part (c):

Wow, thanks for clearing that up you’ve been a great help. Thankfully I can now say that there is no uncertainty in part a or c. Anyways thanks a lot for your help and I will make sure to take these methods with me in future.

I’m glad we could help. I noticed that this problem is labeled “Gold”, which I suppose means it is particularly challenging. Such problems require clear thinking, and you can learn a lot about thinking clearly as you solve them. (In a way, that’s what math is really about: the art of clear thinking.)