One of the more common questions we’ve been asked is, How can the product of two negative numbers be positive? Between this post and the next, I’ll put together many of the answers we have given, starting here with examples from the “real world” (gradually getting more abstract), and next time we’ll look at proofs.

Do we ever do it in real life?

We’ll start with a question from the very first week of Ask Dr. Math; this page was extended when others asked similar questions, and I’ll include several of those here. From November 1994:

Sally’s model is that money is positive, and a bill (requiring payment) is a negative. Multiplication by a positive number means getting the same thing multiple times. How do you multiply by a negative number?

Getting vs sending bills

Is it clear enough that undoing something is equivalent to doing it a negative number of times? Perhaps. I find it hard to keep track of both getting and sending, and money and bills, and being dizzy doesn’t help my understanding!

Taking away a debt

Here, instead of sending a bill, we are having a bill paid for us; removing a negative is the same as adding a positive.

A year and a half later, a reader named Tom added another: 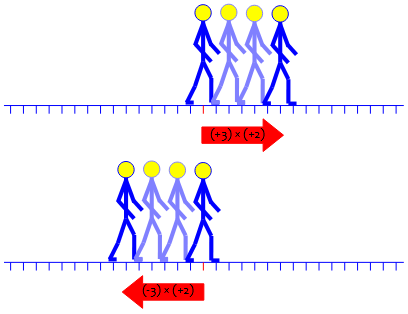 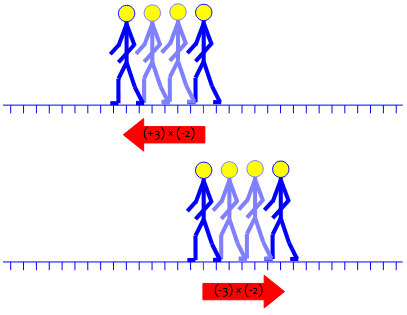 In the last case, we are taking a negative number of negative steps, and moving forward.

Motion past and future, east and west

In 1998, Doctor Pete answered a question similarly, but going backward in time rather than walking backward:

Motion in the past: more detail

Another 1998 question was put in a separate page:

This will be a key idea when we look at proofs next time. When we invent a new kind of number, we have to define the operations in a way that will still be compatible with the operations we know and love. Here, we’ll do that not in the abstract (as we will next week), but in terms of one application of multiplication: rate problems such as we’ve just been considering. But this time, we’ll see them in terms of graphs.

This is where people usually start to question the result; but both the graph, and the image of moving backward, should make it clear: If I walk backward, then in the past I was ahead of where I start. $$(-3)\times (-2)=6$$

This, to me, is the main idea.

Yet another question came in 1998:

Wanting to understand is exactly what we like to see!

Patterns in the multiplication table

Doctor Gail answered in two ways, first with the pattern that I mentioned a moment ago:

This is the same idea as continuing the lines backward in the rate example we just saw.

Then she gave her own version of the rate example:

It could be nice to see a set of such videos; has anyone made some?

What does multiplication look like on a number line? That leads to a unique approach from Doctor Rick: a method for multiplying numbers geometrically using similar triangles:

(The FAQ contains much of what we’ve seen above.)

From here on, I’ll replace his drawings with better ones. Here is the first: 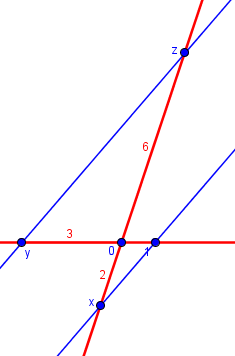 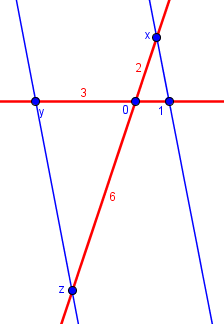 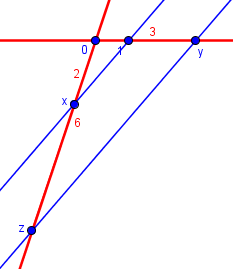