Here is the question, with an included picture:

Here is a typical definition of Greatest Common Factor (at an elementary level), from Math Is Fun:

The greatest number that is a factor of two (or more) other numbers.

When we find all the factors of two or more numbers, and some factors are the same (“common”), then the largest of those common factors is the Greatest Common Factor.

How about the more careful definition of Greatest Common Divisor from Wikipedia?

In mathematics, the greatest common divisor (gcd) of two or more integers, which are not all zero, is the largest positive integer that divides each of the integers. For example, the gcd of 8 and 12 is 4.

This definition requires the GCD to be a positive integer, so this certainly doesn’t apply.

An extended definition of GCD

So what is the book talking about? I pointed out a hint from what was quoted:

I suspect that if you showed us the previous paragraph, that would contain the answer to your question.

They say, “… it is largest, only in the sense of (ii)“. Thus, they have given you a meaning for “largest” that is not what you are expecting. If they are referring to the line I can half-see just above your clip, which begins with “(ii)”, that makes sense. You are expecting “largest” in the sense of “greatest integer”. They are defining it, I think, such that a divisor is “largest” if any other common divisor is a divisor of this one.

In preparing this post, I searched for the relevant phrase and found what appears to be a copy of the textbook (either a different edition, or a related book by the same authors): 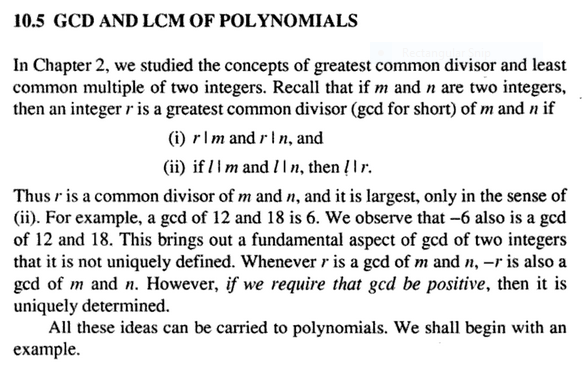 This definition is used, for example, in the first section of this page:

There they are defining the GCD for something called an “integral domain” — that is, for any set of “numbers” that has certain properties that are a generalization of integers, but may not even have an ordering at all, so that you can’t define “greatest” literally. But this definition can be used in that context. They go on to state the usual definition for integers, and later discuss its equivalence.

Then your book goes on to state that if you restrict the gcd to positive integers, it becomes unique, as you expect.

So what is happening here is that this textbook, Challenge and Thrill of Pre-College Mathematics by V Krishnamurthy and C R Pranesachar, like proofwiki, is taking the concept of the GCD and extending it to provide a definition that doesn’t depend on being able to say that one number is greater than another. This extended definition turns out, as they point out, to yield more than one GCD (a positive one and a negative one), but when applied to integers, we can adjust the definition to give the expected result.

In fact, did you notice the section title and last line in the larger selection I quoted above? What they are about to do is to apply this new definition of GCD to polynomials rather than to integers — and since polynomials don’t have the property that any polynomial is either less than, equal to, or greater than any other, this new definition is just what they need. So the context tells us all we need to know to make sense of what they have said.

(When I read to my children when they were young, I would often pause to ponder with them what might be happening in the story, and one of them would say, “Just keep reading — it will tell you!” That is true of children’s books, and it is true of math — unless in fact they already told you, and you forgot.)

That was the end of this exchange; but in preparing this post, I checked to see if we have ever discussed this, or any other, variant definition of the GCD, and found that we have. That usually happens.

First, the specific subject of the GCD of polynomials underlies the following page, which is at a much higher level than my target audience, so I’ll let you read it on your own if you choose:

But a very similar issue with regard to the LCM (Least Common Multiple) arose in the following long discussion:

“Pops”, who had asked the question, then gave his context:

So what he wanted was just a conventional definition of the LCM that would include all reasonable inputs.

The extended definition of LCM

But 12 years later, a math major names Danny wrote in to object to part of what Doctor Rick said, starting with a different definition of LCM — one that is parallel to the one we discussed above, taking divisibility as a stand-in for “less than”:

Danny has missed the fact that the definition Doctor Rick explicitly used does involve “the usual order relation”, and that this is the usual definition outside of abstract math. After Doctor Rick pointed this out, Danny gave good reasons why his more sophisticated definition helps (bear with him, if you are not up to his level):

That is, to a mathematician, “least” here doesn’t mean what we usually think it means, and that is important.

He went on to talk about why we have two different definitions, which is something mathematicians in isolation can easily forget:

Why we need two definitions

I then joined the conversation to sum up, since this matter of definitions has been of interest to me:

We have two very different contexts: ordinary arithmetic with whole numbers, and abstract algebra (which is algebra, or in this case number theory, applied to all sorts of entities that may or may not be numbers). Each has its own needs; if either forced its definitions on the other, it would fail.

This is a common way in which definitions are extended: Theorems in one mathematical realm become definitions or axioms in a larger realm, where the original foundations have been left behind.

If you live in Danny’s world of higher math, you may understand this. If not, just know that up there where the air is thin, the ideas of GCD and LCM change their foundations and look very different, but, having undergone a reconstruction, continue to be useful in much the same ways. And the conclusion (that an LCM can be zero) filters back down to the mundane world.